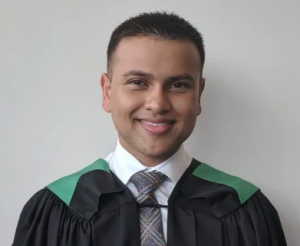 Raphaël Nahar Rivière graduated from the University of Ottawa’s medical school on May 17. He was inspired to study medicine after surviving childhood cancer. (Kanita Khaled)

Raphaël Nahar Rivière was diagnosed with Ewing’s sarcoma, a form of bone and skin cancer, at age seven. He endured an 18-hour bone transplant surgery and rounds of chemotherapy, treatment that lasted months.

It was a dark time for the little boy and his family, but there were also bright spots during his time at Toronto’s Hospital for Sick Children. Rivière remembers play rooms, clowns, colouring books and visiting dogs.

“At home we didn’t have any video games, but at the hospital there was a Nintendo and I loved playing Pokemon Stadium,” Rivière told host Robyn Bresnahan on CBC Radio’s Ottawa Morning.

He also became fascinated with the doctors who were treating him, and resolved to become one. 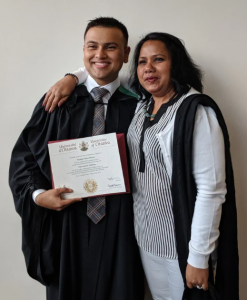 Kept up his studies

Rivière kept up with his schoolwork while in hospital, and his oncologist and surgeon encouraged him to keep studying.

He took their advice, motivated to learn more about his disease in particular, and medicine in general, so that he could help others the way he’d been helped as a child.

“This happened to me, but I got out of it relatively unscathed. That’s why I need to …follow this through a career.”

Rivière’s family immigrated to Canada from Bangladesh, seeking a better life for Raphaël and his sister, Kanita, and eventually settling in Toronto.

He was diagnosed three months later.

His father left the family after struggling to adapt to life in Canada while coping with the stress of having a sick child.

‘It was very special’

Rivière said his mother supported the family working a retail job, and never let her son’s illness become his focus. “You’re sick. that’s fine. But you’re going to study,” he recalls her telling him.

She returned to school after Rivière had been cancer-free for 10 years, and is currently working on her PhD at the University of Toronto.

When he crossed the stage at the University of Ottawa to receive his medical degree on May 17, Rivière said he was thinking about how it wasn’t an accomplishment he could have obtained on his own.

When he embraced his mother afterward she told him, “So proud of you. You did it! Congratulations, Dr. Rivière.”

“It was very special,” he said.