Professor Jamilur Reza Choudhury confirmed his availability today. Thus, I cordially invite you to join in VAB Fundraising event on 19th January 2018 in Dhaka , Bangladesh. It would be really nice if we all could make this event successful. It’s a long overdue note of thanks and appreciation for your generous donation to VAB at its 2017 Award Event on November 25, 2017. My apology for the delay. And do accept our deepest appreciation.

We have since then heard all of your various tremendous philanthropic support including our rural VAB children’s Education. Our invitation to you is always open. Thanks !

P.S.
Kindly send your address for us to write out the receipt of the fund. To know more about us: 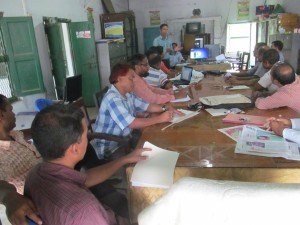 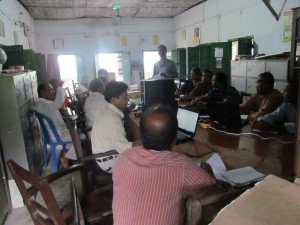 VAB provided 2 Corei3 Toshiba latops and one desktop computer.
Mr. Abul Kalam Azad, Program Officer & Computer Instructor of VAB conducted a 2 days (18-19 August, 2014) training in computer. Eighteen teachers of the school attended the training. They are very pleased to get the computers & training.

The selection committee of the body of ” NICAS CANADA”  has decided to honour and award VAB and its founder at a reception ceremony in Ontario Legion Hall on Aug 24 Sunday with other awardees. 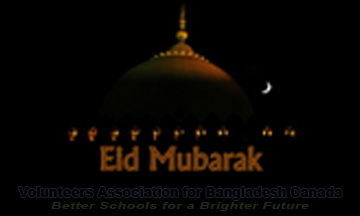 Dear friends and VAB Canada family:
There are many destitute children, parents and families are going to miss this Eid festival, especially in the war conflicted zone across the world.
Let’s sit for a while and think quietly and send our good wishes for those helpless/victims through loving- kindness practice.
On behalf of VAB Canada, with a heavy heart I wish you all a blissful Eid.
Warm regards,
Pamelia Khaled
Founder-President Volunteers Association for Bangladesh Canada (VABC)
www.vabcanada.org

There were also many dignitaries and educators  present at the conference. 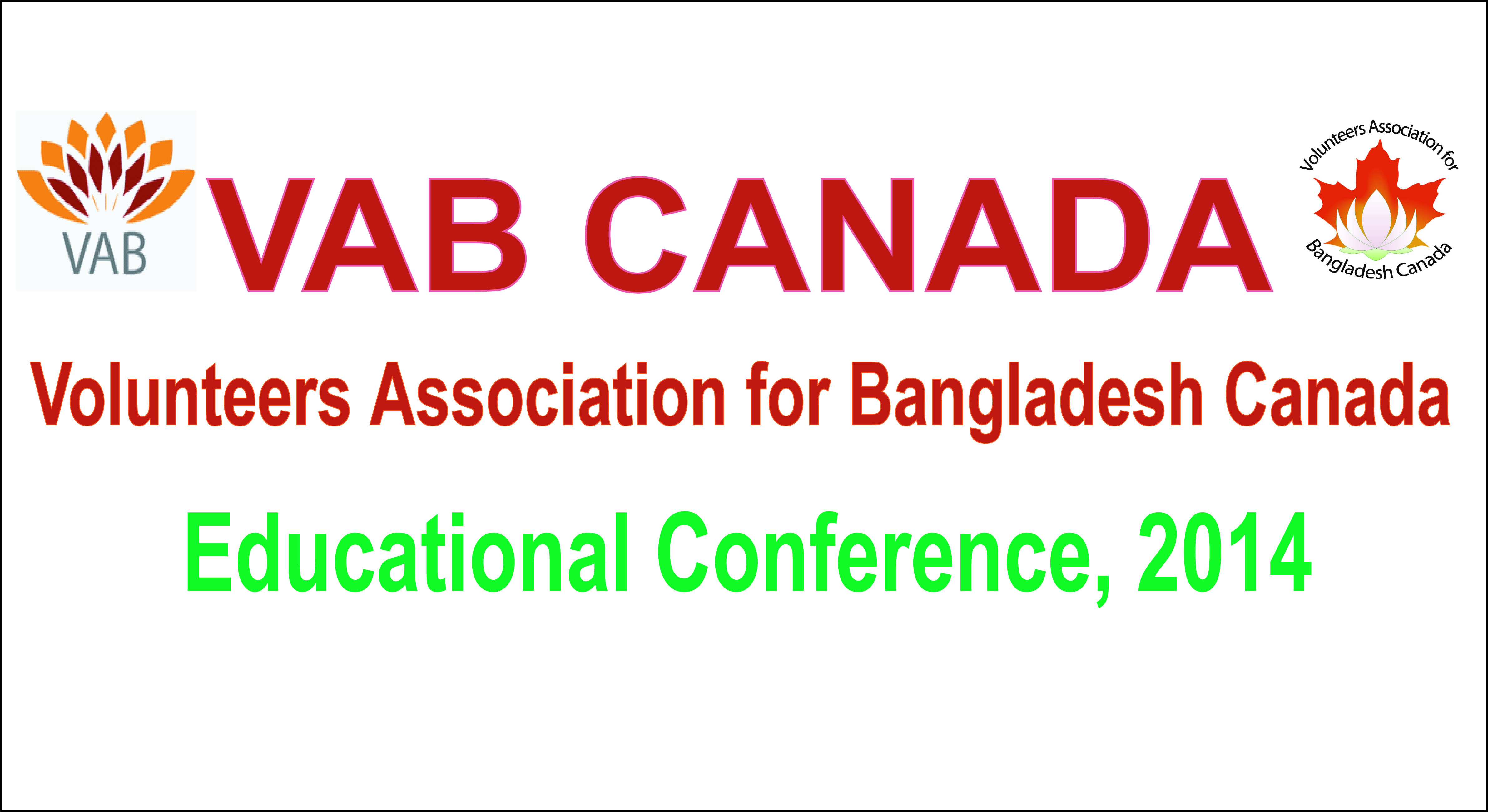 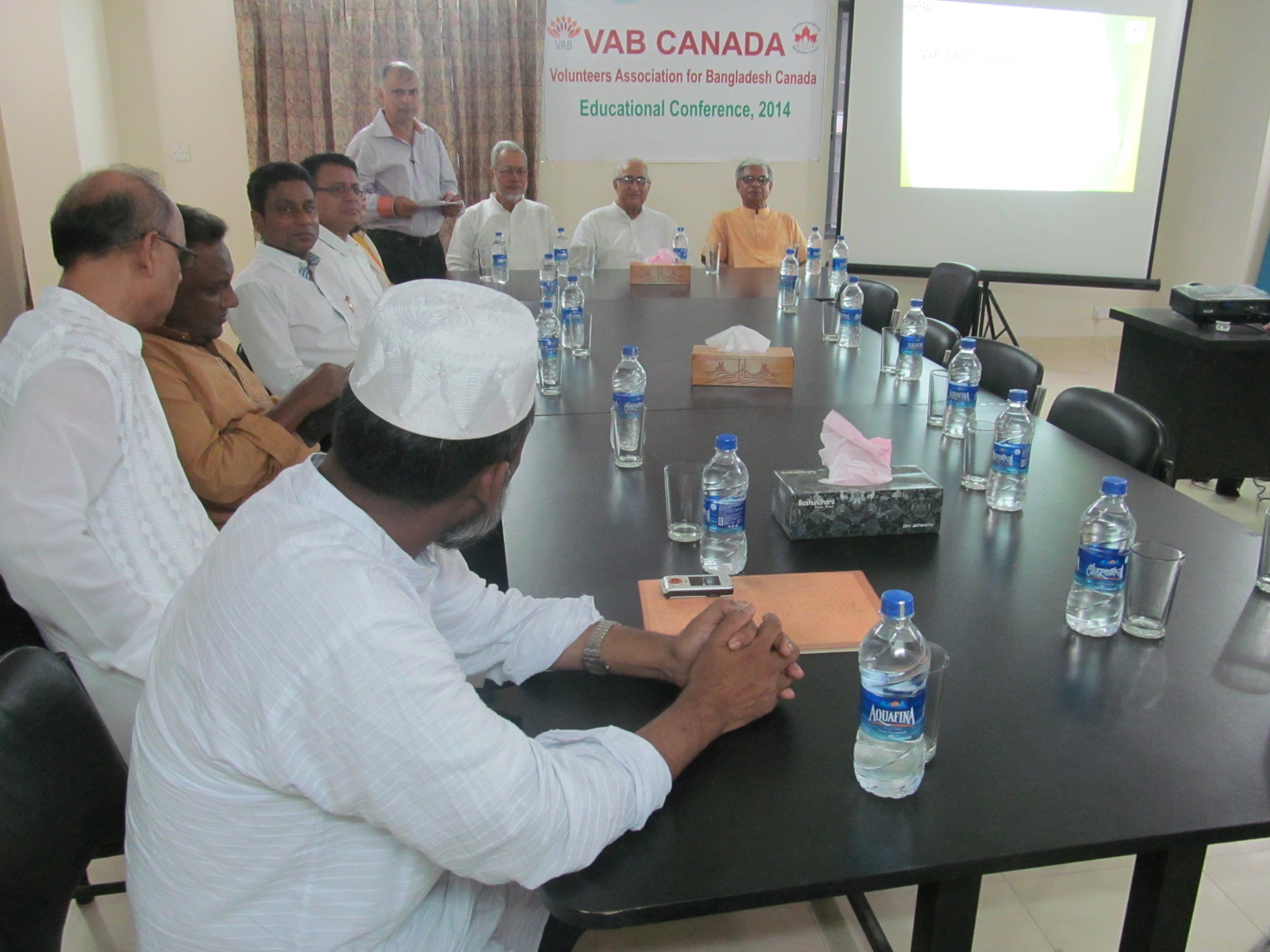 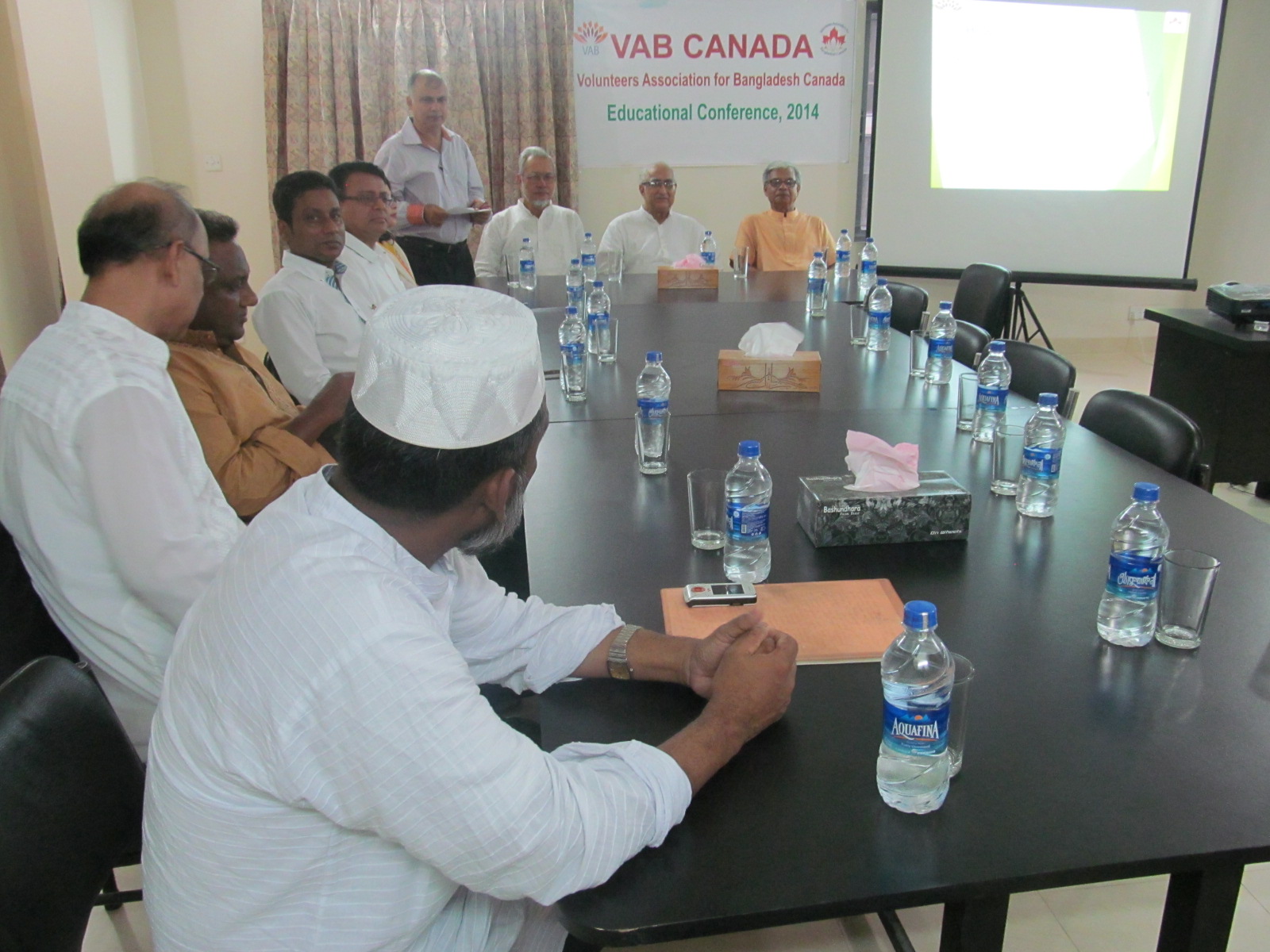 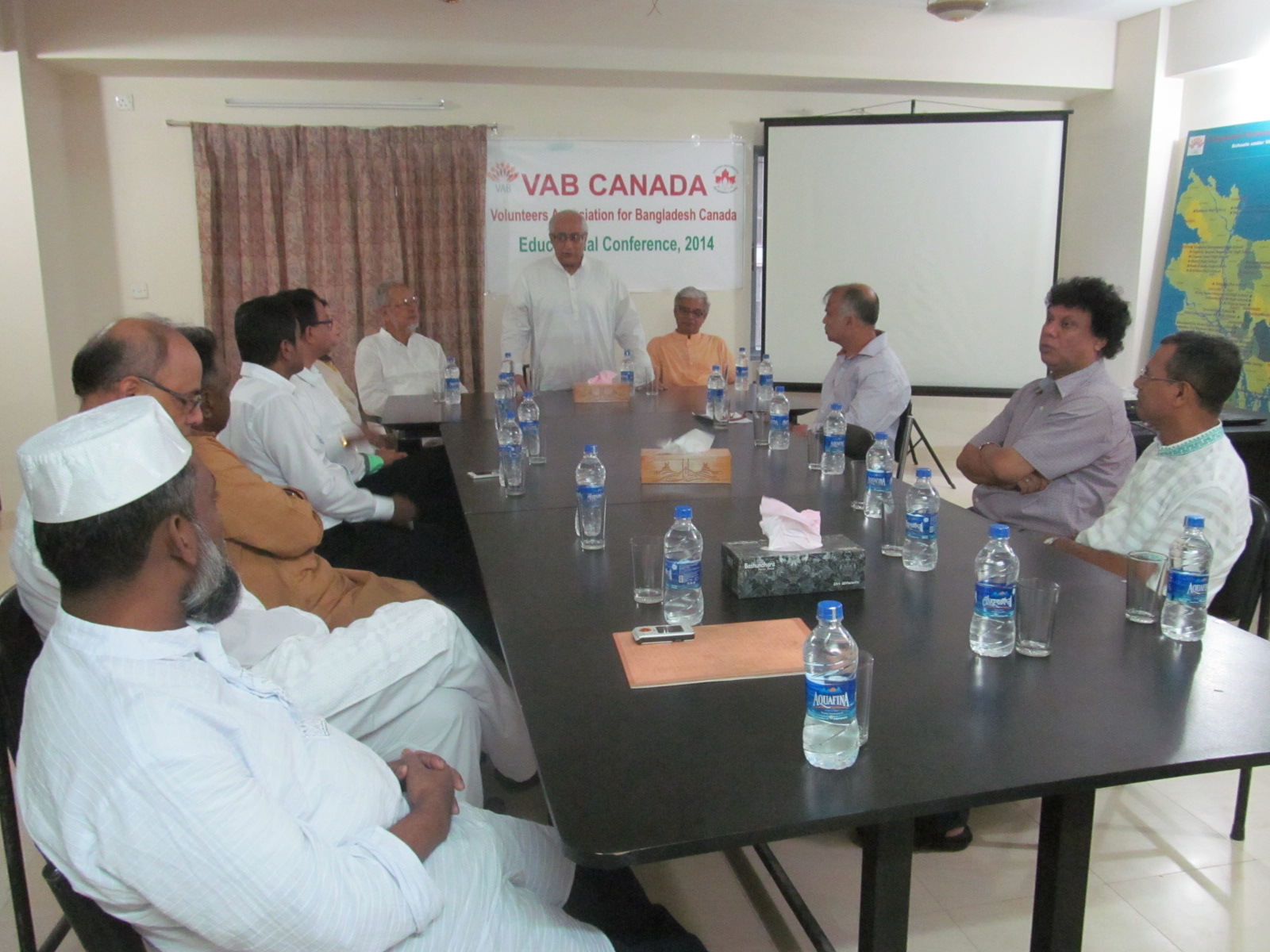 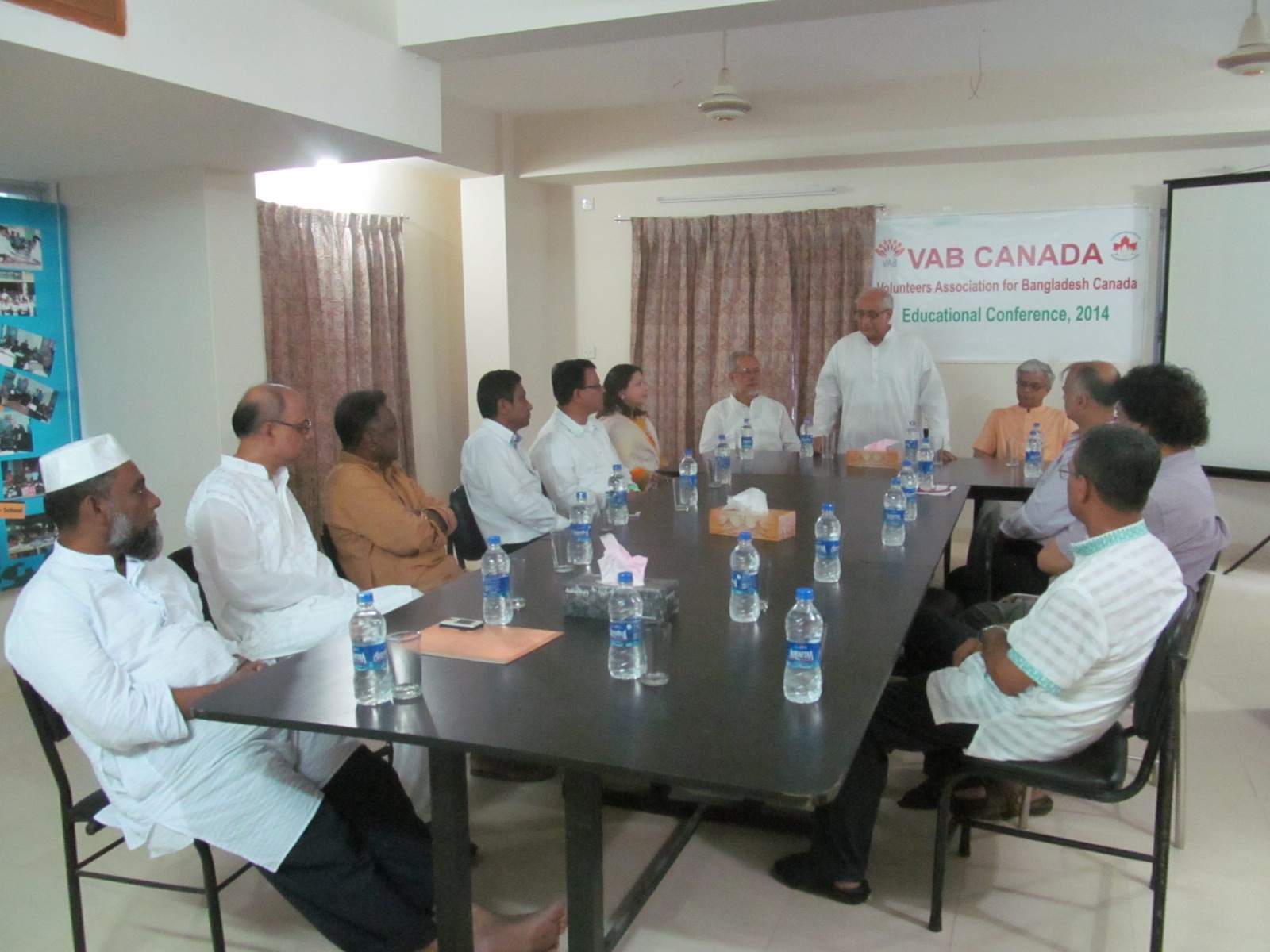 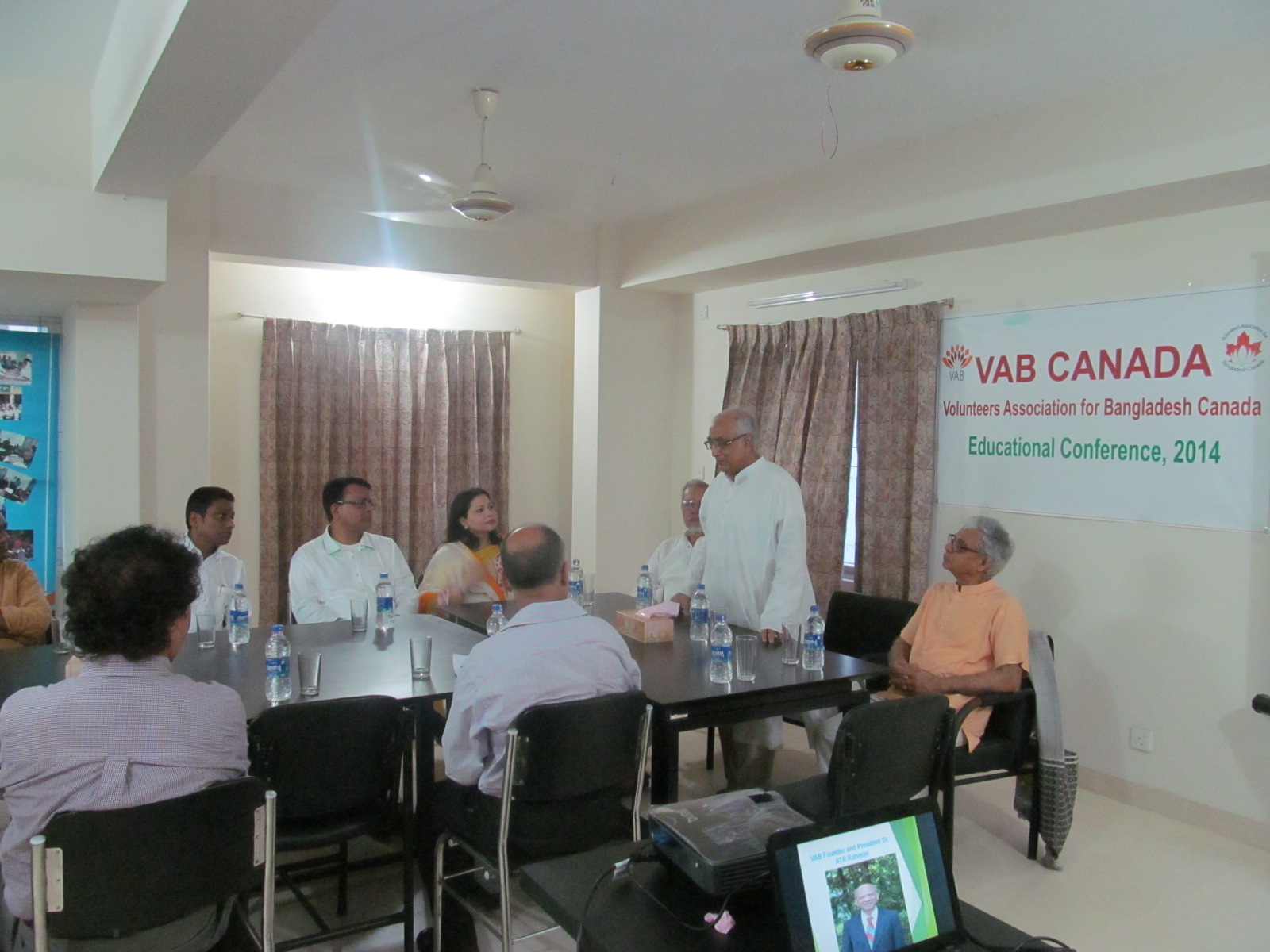 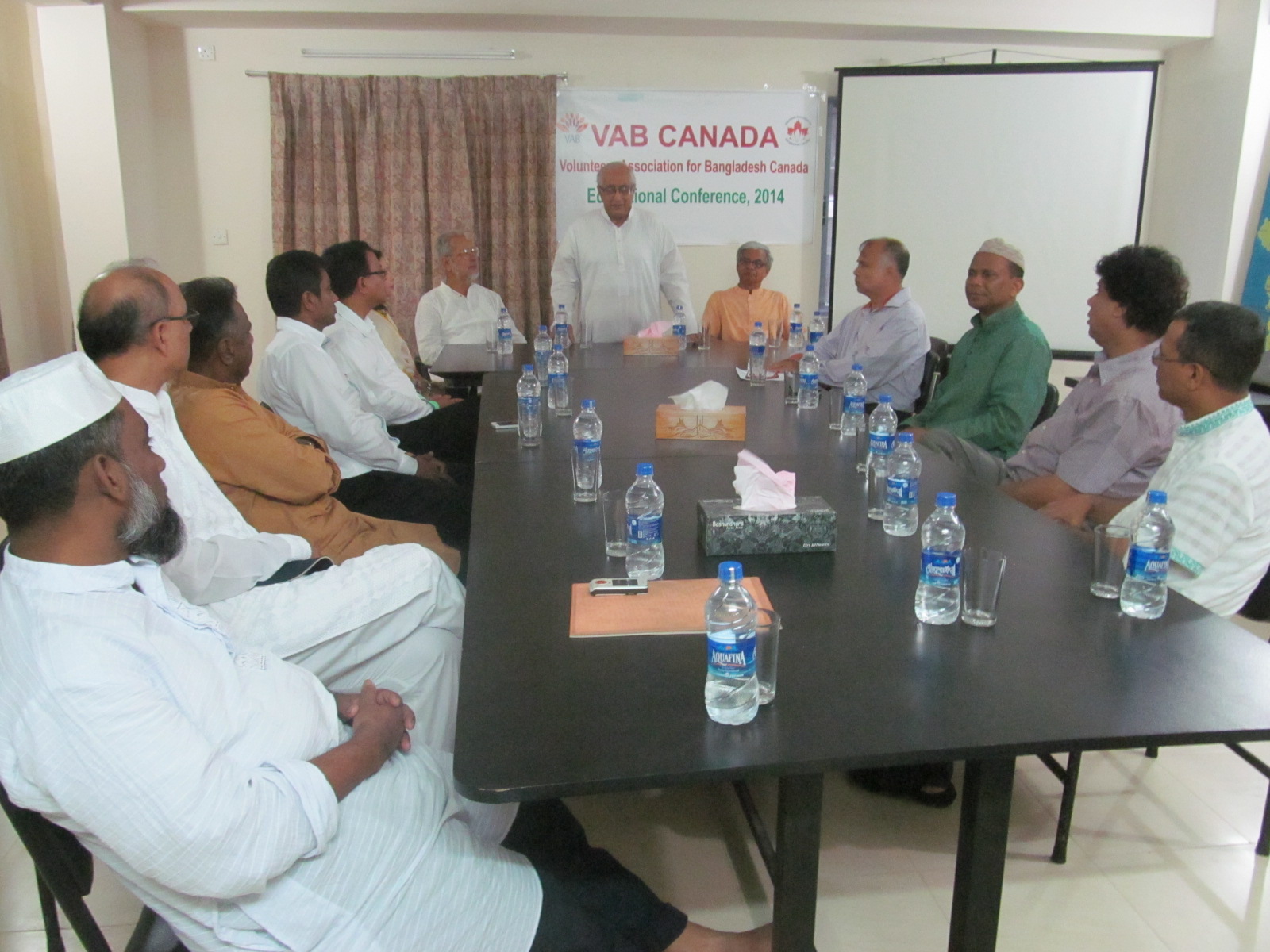 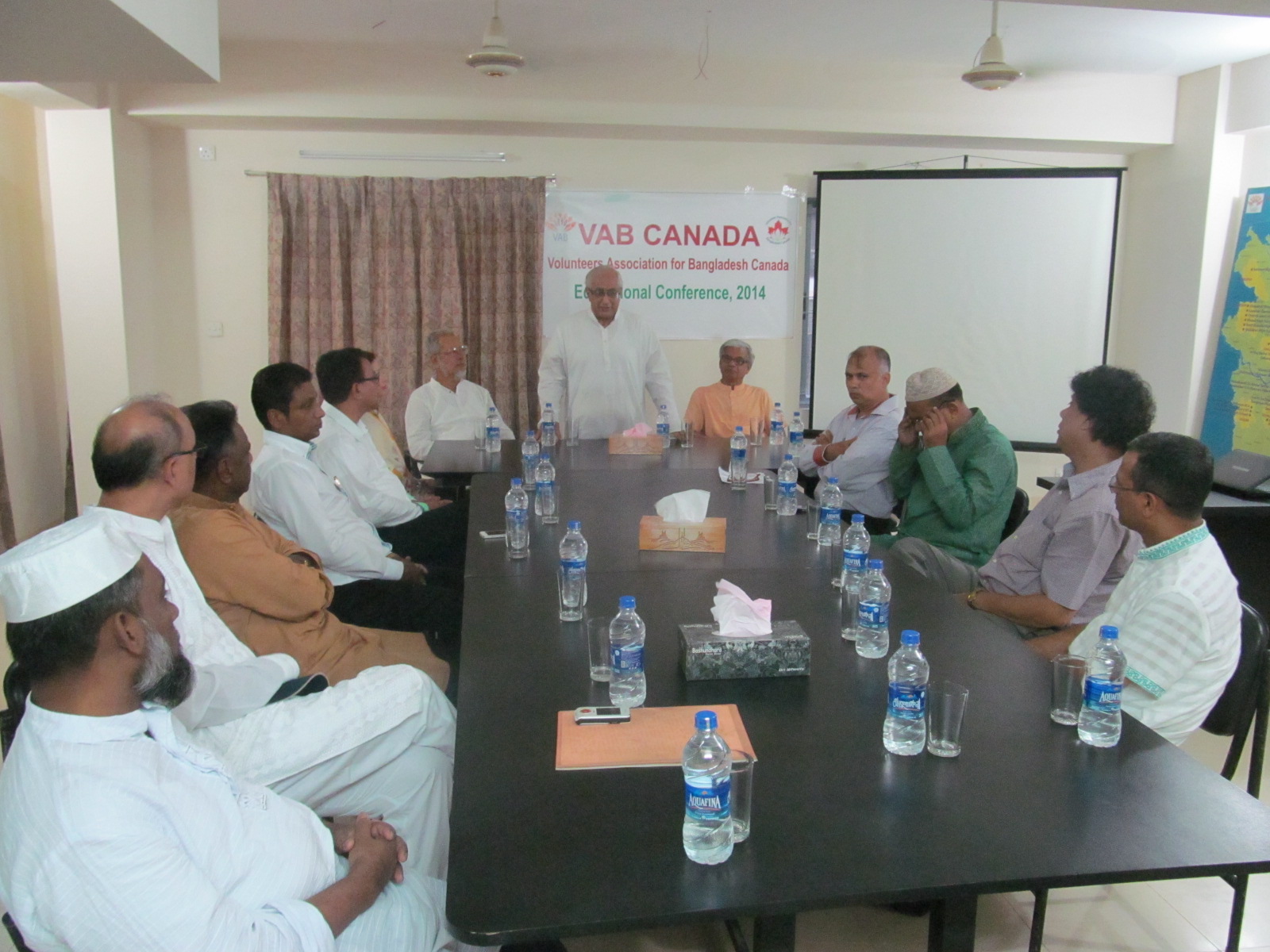 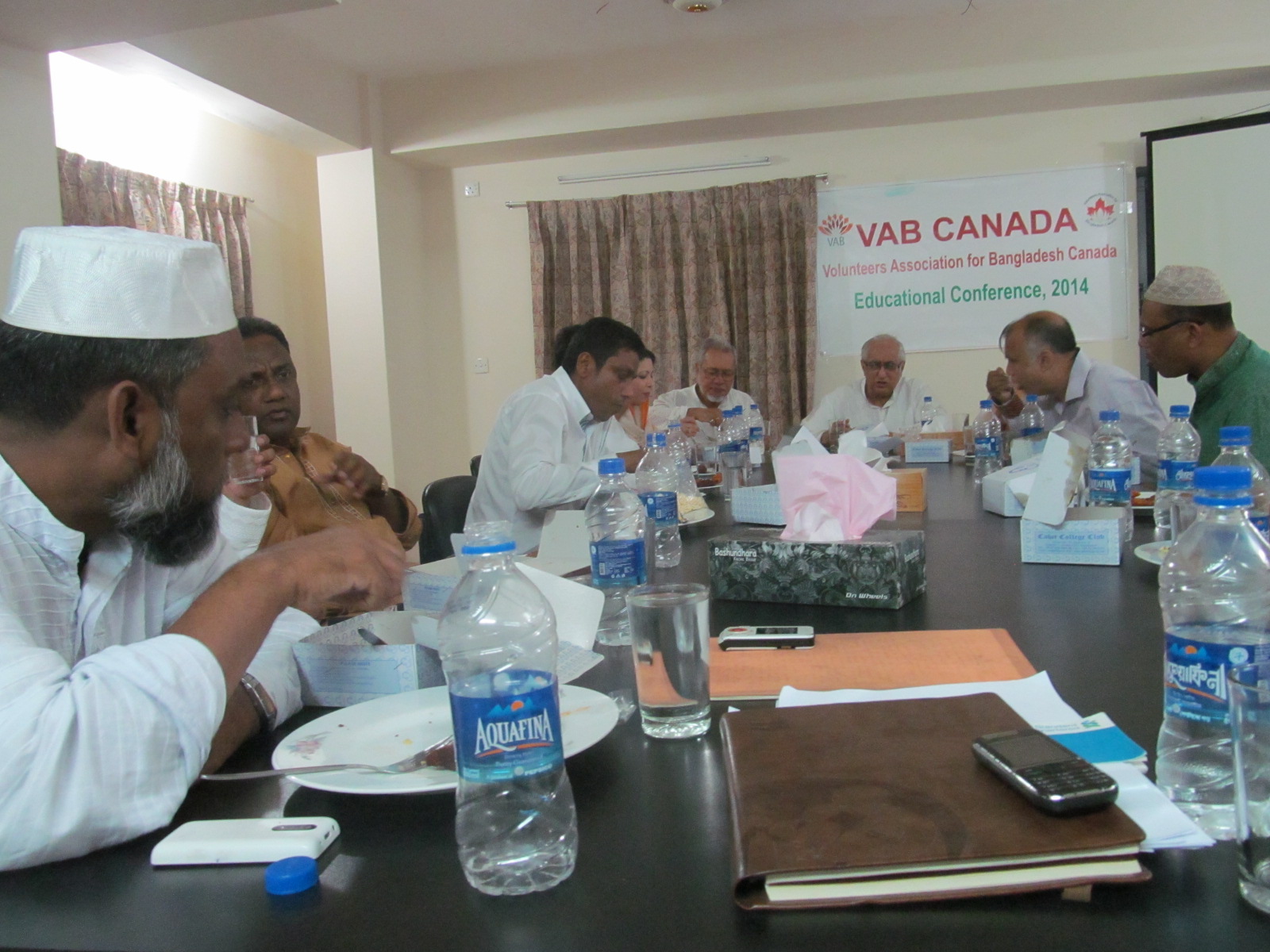 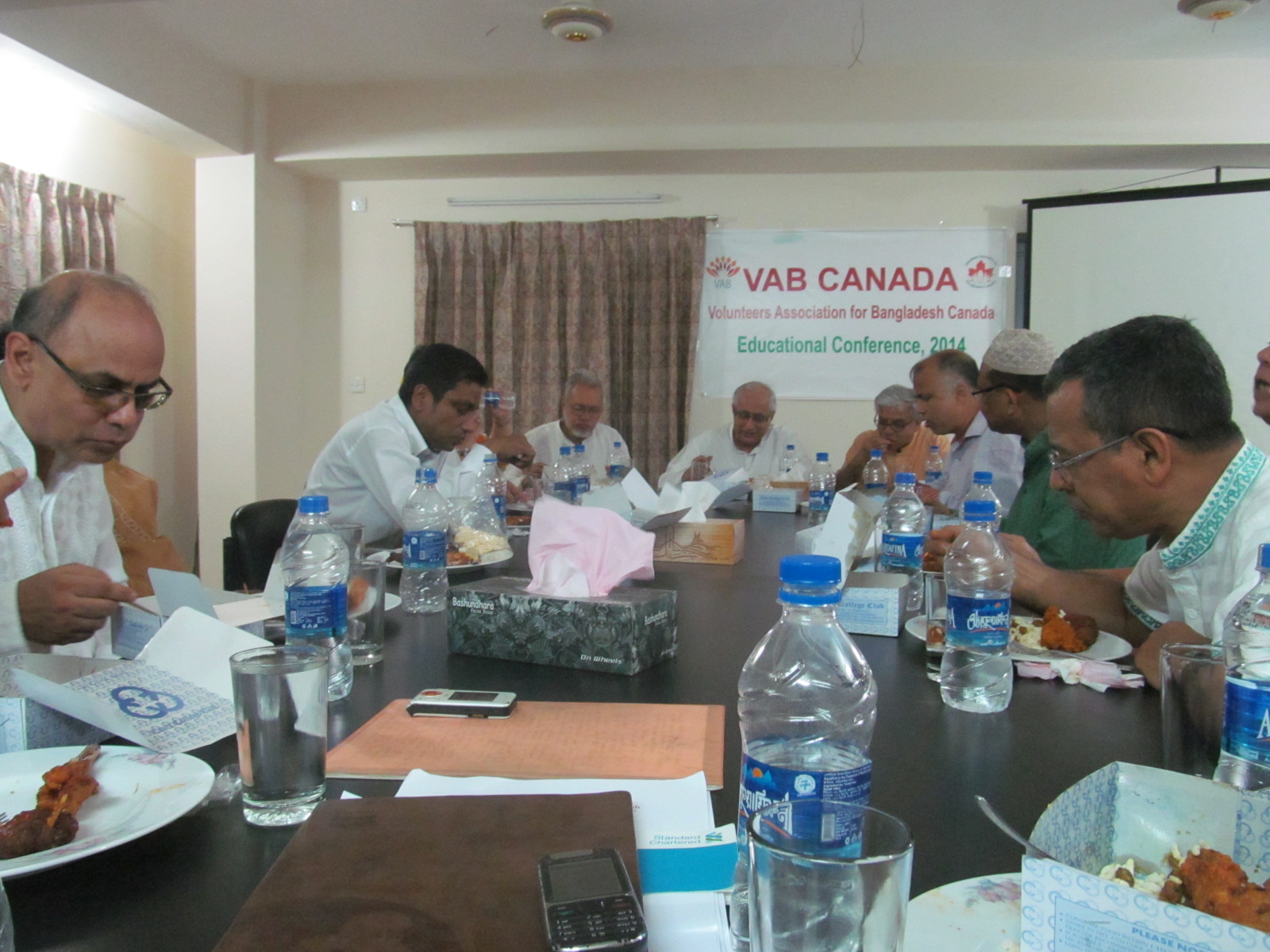 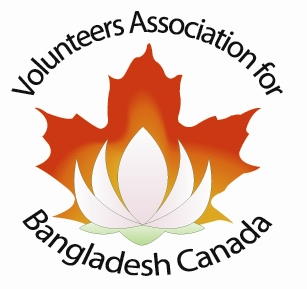 VAB Canada President Pamelia Khaled thanks to Dr. Jasimuz-zaman,country director of Volunteers Association for Bangladesh(VAB) for his support for arranging an Iftar party in Bangladesh in the mid of July, 2014. She also thank and welcome all the VAB dignitaries who will be present in the Iftar event.
Pamelia Khaled is delighted to share with all the members/partrons/volunteers “the VAB Canada Iftar party” arrangement news she has received from Dr. Jasimuz-zaman, the country director, VAB in the morning. This Iftar party is planned by Mr. Maruf A Khaled along with the assistance of other director and advisor are present now in Bangladesh. The goal of this Iftar party is to develop connection with VABC and VAB and Bangladeshi business professionals and educators. Besides networking, the VABC planners/associates will seek support for zakat funds, educational programmes donations from Bangladesh and Canada end. VABC invites intellectuals, wealthy patrons (in Bangladesh) in this Iftar event to develop awareness about VAB and VAB Canada’s goal and objectives.

We are searching for ‪VOLUNTEERS who want to do something for Kids.
This Ramadan, ‪VABC Foundation is collecting ‪ZAKAT for VABC CHILDREN’S School Dresses and healthy Foods.
Join in and spread the word across the globe if you are interested to help disadvantaged children in Bangladesh.
Join with us to be a part of VAB Canada.

volunteers Association for Bangladesh Canada hosts a special event on 22nd September at St. Patrick Secondary high school auditorium. “The VAB-C Concert Night” is supported by Torontonians professionals and the most famous Singer Farhana Shanta that builds Bangladeshi and Canadian community spirit and raises money for the disadvantaged Bangladeshi children’s education and support programs. Your participation plays a big role in our efforts to reduce inequality in education and improve the quality of our children’s’ lives and environment.