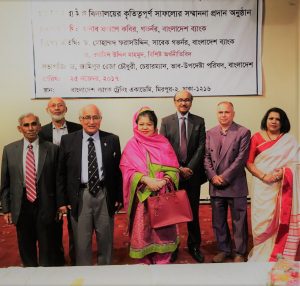 2013 was a year of consolidation for VABC with a whole year of various preparations and plans for future expansion: December 9th, 2012 was an auspicious day for Volunteers Association for Bangladesh Canada. During the computer sponsorship celebration event, Bangladeshi professionals of Toronto joined forces with members of VABC on a digital education mission to improve skills for the disadvantaged high school students of rural Bangladesh.

2. curriculum design should include math and literacy teaching starting in preschool, technology training and attention to addressing patriarchal attitudes and customs;

3. language of instruction must include a focus on both English and Bangla;

4. education accessibility for rural and poor sectors; and

5. gender-sensitivity in both policymaking and curriculum design.

Thus,Volunteers Association for Bangladesh Canada (VABC) aims to support charitable and socioeconomic development activities for the disadvantaged in Bangladesh as well as the growing Bangladeshi community in Canada. These activities will also enable Bangladesh to develop into a stronger civil society and thriving democracy. Under the above five broad aspects, the specific purpose of this charity organization is to support primary and secondary education of the poor and the disadvantaged students in Bangladesh.

Since launching the Canadian chapter of VAB, we have undertaken two major fundraising events: a Fund Raising Concert on 22nd September 2013 and a Letter Campaign for the Zakat fund.

2013 was a year of consolidation for VABC with a whole year of various preparations and plans for future expansion:

December 9th, 2012 was an auspicious day for Volunteers Association for Bangladesh Canada. During the computer sponsorship celebration event, the Bangladeshi professionals of Toronto joined forces with members of VABC on a digital education mission to improve skills for the disadvantaged high school students of rural Bangladesh.

All VAB schools are in rural Bangladesh where the schools, the community and the students are poor and deserve help. In fact, we have a large allocation for scholarships for needy students, for example in 2012, we awarded 1,387 high school scholarships to 57 schools.   The estimated need for scholarship in 2013 is 30 lac taka. We take utmost care in selecting genuinely poor students. We take the recommendations of the school and we have staff members and volunteers who visit the locality and meet the parents and the students and in some cases visit their homes. Thus, VABC raised funds through Zakat to provide scholarships for the talented but disadvantaged children.

In 2013, the Bangladeshi poor suffered a few weeks of extreme winter spell. The VABC distributed winter goods to the unreachable at earliest possible. The VABC also initiated distribution of warm clothes for the cold-stricken children in Bangladesh. We are pleased that we got a very good response from our members. The following members contributed for this good cause:

Mr Kashem and Mr. Noman and Mr. Mamnoon provided their support in Bangladesh

The apparel sector in Bangladesh has been experiencing a sustained boom since the late 1990s. By2007/08, the sector was earning more than $10 billion in the form of proceeds from sales. It earned $19 billion in 2012 and thus emerged as the impoverished nation’s biggest export-oriented sector. Bangladesh is now the world’s biggest exporter of clothing after China. But the saddest part of the story is Bangladesh’s garment sector and its workers continue to be neglected as ever.

The latest case is the Rana Plaza tragedy, in which the building housing several garment unitscollapsed at Savar in Dhaka and killed over 1000 workers and left hundreds injured. The worst-ever tragedy in the apparel sector shocked people in the country as well as those abroad. So, once again VABC stepped in to collect funds for the victims.

On behalf of VABC, I extend my hearty congratulations to all who worked hard last year for the growth and progress of this organization. This year VABC has planned to create a strong volunteering team and targets to raise $25,000 -50,000 net. Fundraising events for this year include a Gala Dinner and also other interesting events. The President and the Volunteer Team will focus on realistic implementation steps and monitor them closely. Meetings will be held fortnightly initially and later weekly to ensure that the Team reaches its target of having at least 200 members, including new potential donors.